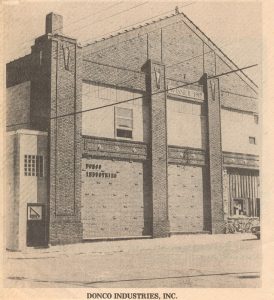 Raymon Company started in the early 1970s in Waterloo, Iowa under the name of Donco. It’s first products were designed for passive sound cancellation. By the late 1970s, the company was located above a bowling alley in Eldora, Iowa and manufactured a line of slot and troffer diffusers. The product plenums were made of fiberglass ductboard. There were four employees and two motorized machines. Everything else was accomplished with knives, hand shears and a leaf brake. Larry and Joynell Raymon acquired an interest in the company in 1979. In 1984, the company moved to its current location in Albion, Iowa. The Raymon family acquired full ownership of the company in 1985 and the company name was changed to Raymon in 2006.

Today, Raymon Company is a major manufacturer of grilles, registers and diffusers for commercial buildings. Sales are made through a network of manufacturers’ representatives in offices across the United States and Canada. The company also does OEM work for other companies in America and is affiliated with the Sheet Metal Workers International Association, Local 45.

Raymon has a reputation for high quality air distribution products combined with incredible customer service. Its core values include taking care of its employees, customers and community. Sharing your challenges, earning your trust, time after time, Raymon continues to invent and reinvent industry standards for quality, reliability, service and ingenuity.